What is normal when you are dating?

Wanting to have sex with your dating partner? Yup.

Texting each other throughout the day? Totally.

But at what point do these behaviors cross the line to become abusive?

Being pressured into having sex with your partner when you aren’t ready to take that step? Emotional abuse.

Constantly having to text your partner to “check in” or getting punished for not answering a text quickly enough? Emotional abuse.

Being forced to spend all your time with your partner, at the expense of your relationships with friends and family or activities you enjoy? Emotional abuse.

It doesn’t leave outward scars, but that doesn’t mean it can’t cause serious damage to a survivor’s mental and emotional well-being. Often, it is one of the key warning signs of an unhealthy or abusive relationship. Emotional abuse can take on many forms, including jealousy or possessiveness, isolation from friends and family, stalking, threats of suicide or harm to someone you care about, name calling and put-downs, and digital abuse. What’s worse, is that when emotional abuses happen, they can take a toll on a survivor’s self esteem, mental health, and physical health. When an abuser keeps telling their partner that they are “ugly”, “worthless”, “dumb”, “untrustworthy”, and “crazy”, the partner may start to believe the abuser, making it that much harder to end the relationship. Because it comes in so many forms, it can be easy to miss, or dismiss as normal. But emotional abuse is not normal.

Let’s run through some scenarios of emotional abuse in dating relationships.

Dave and Jessica have been dating for a while. More and more, Dave is pressuring Jessica

into having sex with him and sending him nudes. Jessica doesn’t feel ready to have sex, but she does send Dave some pictures of herself in her underwear. Dave keeps saying, “If you love me, you will have sex with me.” Jessica decides she isn’t comfortable with the pressure Dave is putting her under and tries to break up with him. Dave threatens to kill himself if Jessica breaks up with him. Jessica apologizes and says she won’t break up with him. Eventually Dave breaks up with Jessica because she won’t have sex with him. After they break up, Dave posts the pictures Jessica sent him online, calling Jessica a slut and whore.

What types of emotional abuse happened in Dave and Jessica’s relationship? Dave was pressuring Jessica into doing something she wasn’t comfortable with and then tried to manipulate her into doing it to “prove” she loved him. When Jessica tried to end the relationship, Dave made threats of self-harm to control Jessica into staying with him. When Dave broke up with Jessica, he posted private pictures online and called her names. Dave’s abusive behaviors included emotional manipulation, threats, verbal abuse, sexual abuse and digital abuse.

Let’s look at another scenario. 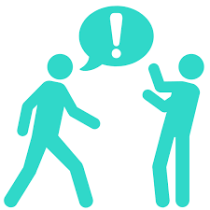 Cally and Luis mostly communicate via text throughout the week. Luis tutors after school to earn some extra money, so he can go spend time with Cally on the weekends. Cally told Luis she has been cheated on before, so she has a hard time trusting her boyfriends. Cally tells Luis to give Cally his social media passwords to make sure he isn’t talking to other girls, saying “It shouldn’t be a problem if you don’t have anything to hide from me.” Luis knows he isn’t cheating on Cally, so he gives her his passwords so she will trust him. One day, Luis is tutoring a girl who tags him in a picture of them together on Facebook. Luis silences his phone while he is working, so when he does go to check his phone after work, Luis finds 37 missed calls and 107 texts from Cally that she sent during the hour Luis was tutoring. Many of the texts accuse Luis of sleeping with the other girl and says Luis is an “asshole just like all of my other exes”. When Luis gets a hold of Cally, she demands that Luis not tutor the other girl anymore. Eventually Cally starts telling Luis to quit his tutoring job, because Cally can’t trust him, even though Luis has repeatedly told Cally he hasn’t cheated on her and never will.

Cally made excuses for her behavior right from the start, blaming her behavior on her past relationships. Cally insisted she be allowed access to Luis’s social media accounts to prove Luis isn’t cheating. When Luis didn’t immediately respond to Cally’s calls and texts while he was working, she blew up his phone with excessive contacts in a short period of time. Cally called Luis names, accused him of cheating on her, and demanded he stop tutoring other girls, ultimately leading to her telling him to quit his job. Cally made false accusations, displayed extreme jealousy, and was digitally, verbally, and financially abusive to Luis.

Let’s look at one more scenario.

James and Sarah started dating over summer break. When they go back to school in the fall, Sarah starts playing volleyball and isn’t seeing James as often. After school, Sarah usually spends time with her friends. When she does see James, he asks her to spend

more time with him and accuses Sarah of not putting their relationship first. James tells Sarah to quit volleyball so they could be together more. James and Sarah start fighting a lot, and James always ends up yelling and calling Sarah selfish. After their fights James always says, “I hate when we fight, but you just make me so mad! That is why I yell at you.” Sarah agrees to quit volleyball, even though she really enjoys it. James starts showing up where Sarah is hanging out with her friends, even though she didn’t tell him where they would be or invite him. James also starts repeatedly calling Sarah’s house late at night and hanging up, and leaving little gifts in her car, which makes Sarah uncomfortable. Sarah breaks up with James, but he continues to show up at the places she is at and leaving little gifts in her car, even though she had asked him to stop.

James tried to insinuate that Sarah was selfish and not putting their relationship first, forcing her into quitting something she enjoys doing. James also blamed Sarah for him getting angry and yelling at her. James escalated to stalking Sarah, even after she broke up with him and told him to leave her alone. James was emotionally manipulative, put Sarah down, isolated her from activities she enjoyed, and was stalking her.

It doesn’t leave outward scars. It makes you second guess yourself. It makes you feel bad, or that you are going crazy. Emotional abuse is controlling, without ever laying a hand on you. Emotional abuse can lead to physical abuse and sexual assault. It is important to try to set healthy boundaries early on in your relationship and recognize that you aren’t alone, even when your abuser may insist otherwise.

AVRC Staff is available 24 hours a day, 7 days a week. If you have any questions about emotional abuse, healthy boundaries and dating violence, or if you want to seek support and safety, help is only one call away.

1 thought on “Emotional Abuse: Bruises on the Heart & Mind”

Can’t find what you’re looking for?