When googling burglary or robbery, both topics frequently come up in the same search. They are different crimes, though they do seem to often be linked. The main difference between the two has to do with the presence (or rather the lack thereof) of the victim of the crime. With burglary, the victim does not have to be present in order for the crime to be charged. This is not the case with robbery, which, as defined by Colorado state law, is when A person knowingly takes anything of value from the person or presence of another by the use of force, threats, or intimidation (CRS Sect. 18-4-301). 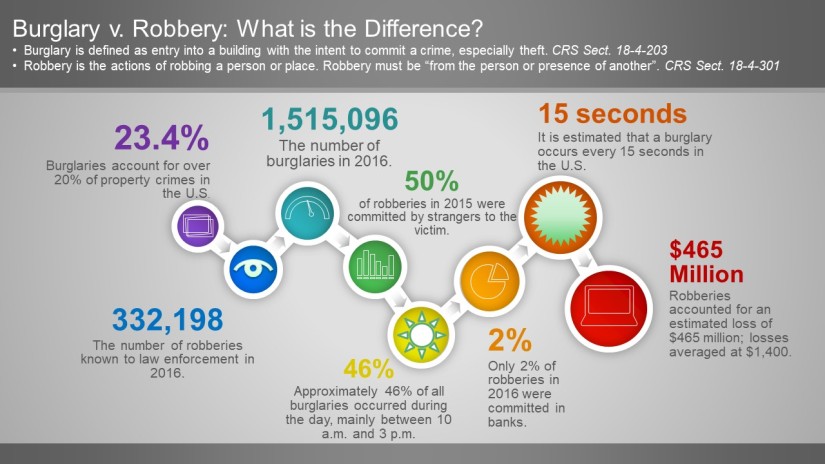 Burglary seems to inherently come with the image of a large figure in a striped sweater and mask, equipped with a crowbar and a flashlight.

However, this cartoon stereotype isn’t entirely accurate. Second degree burglary is defined by Colorado state law as knowingly breaking an entrance into, entering unlawfully in, or remaining unlawfully after a lawful or unlawful entry in a building or occupied structure with intent to commit therein a crime against another person or property (CRS Sect. 18-4-203). With that in mind, it is entirely possible that someone can be charged with burglary, and have no intent to commit the additional crime of theft. Another debunk of the stereotypical image of a burglar is they are sneaking into the home in the dead of night, when residents are asleep, flashlight in hand. The reality is that most burglaries occur during the day, when a flashlight isn’t really necessary. In fact, of all the residential burglary cases reported in 2016, a majority occurred during daylight hours, specifically between the hours of 10 a.m. and 3 p.m. This percentage may be even higher, as 13% of residential burglaries occurred at unknown times, such as when the victim was away on vacation, and discovered the crime when they returned home. This is why it is important to not post on social media that you are currently on vacation in the Bahamas for 2 weeks, because it can alert potential burglars that you will be away from the home. 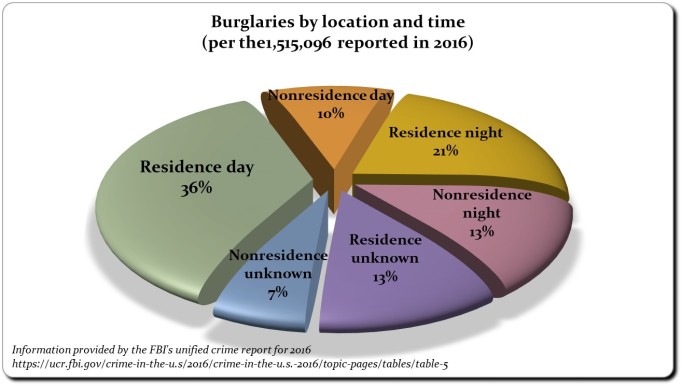 Robbery is defined by state and federal law as a violent crime, as opposed to burglary, which is most typically considered a property crime, under most circumstances. In 2016, there were 332,198 reported cases of robbery nationwide, including 3,528 cases reported in Colorado. According to the Bureau of Justice Statistics, in 2010, “robbery was the most likely offense to involve an armed offender (44 percent)” and “firearms were the most commonly used weapon (29 percent)”. Most robberies occur on the street or highway, accounting for 38% of the incidents nationally reported in 2016; bank robberies accounted for 1% of the reported incidents. Other locations that robbery was reported to have occurred in 2016 included gas/services stations (2%), convenience stores (6%), and residences (16%).

Both crimes can have a lasting impact on victims, including nightmares, flashbacks, and/or trouble sleeping, all of which are potential symptoms of Post Traumatic Stress Disorder (PTSD).  In a survey of child survivors of burglary, there was indication that the self-confidence of the child was damaged after the attack on their home. For robbery victims, reactions are much the same, including being hyper-vigilant, or being nervous in large crowds, and being suspicious of strangers. All of these reactions are completely normal for what survivors have gone through; it is a normal reaction to an abnormal experience.

Should you, a loved one, friend, or family member have been a victim of burglary or robbery, support is just a phone call or car ride away! An AVRC Advocate is available 24/7 to answer the questions you may have about this issue, so don’t hesitate to reach out!

Can’t find what you’re looking for?